Friday and Saturday were very eventful and emotional days, and last night I went to bed around midnight, exhausted, fully expecting to sleep for ten hours. But I woke up at 5 this morning with thoughts of the previous two days filling my head, and I couldn't get back to sleep, so decided to get up and start organizing photos and writing this blog post.

A few weeks ago, my Lynchburg sister Anne & I decided to come to Blacksburg this weekend to accomplish a couple of tasks. Anne had books she wanted to donate to the families of the Virginia Tech shooting victims, and I wanted to help with sewing some of the knitted & crocheted squares into Hokie Healing Blankets which will also go to the victims families.

My friend Isobel from our Tuesday Night Knitters group was able to take off of work early Friday and ride along with me, so we left Richmond around noon and made it to our hotel around 4 pm, after a couple of stops for gas and lunch. Anne arrived in Blacksburg about two hours earlier and completed her book delivery to the Dean of Students office, so after settling in at the hotel, the three of us drove over to Mosaic. We wanted to offer our help in setting up for the following day's activities, and also to shop a little (of course). Mimi was working and assured us that they had things well under control for the sewing party, and so I then proceeded to do my part to stimulate Blacksburg's economy by making a purchase of some Tilli Tomas "Rock Star" beaded silk in a gorgeous Jade colorway. It's the least I could do. ;-) 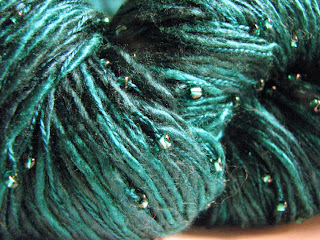 After leaving Mosaic, we met up with my old high school friend Judi who is on staff at Tech. (You may recall the Hokie Hope Hat I knit for Judi a few weeks ago.) Judi works closely with the student group that calls themselves "Hokies United". These kids are the volunteers who organized the candlelight vigil on Tech's drill field the Tuesday evening after the shootings, and who now very unselfishly and reverently maintain the memorials for each of the shooting victims. 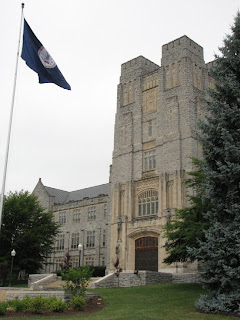 Judi graciously offered to give us a tour of the campus and show us the memorials. Our first stop was Norris Hall, where we walked all around the outside as Judi gave us a narrative of her local perspective of the horrific events, pointing out where some of the broken-out second story windows had been replaced, and more chillingly, remnants of blood on the sidewalks. There seemed to be a hush over the building, a cocoon of silence, if you will, and I felt both grief and reverence, as we paid our respects to those who lost their lives there. Certain aspects of the scene seemed very familiar, thanks to all the media coverage.

We then walked over to the drill field, where a soccer game was in progress, and I was comforted that students are feeling "normal" enough again to be able to partake in carefree activities. As we observed the arc of memorial stones for each of the victims, and a 33rd stone someone added for the shooter, I made an effort to capture images of the memorials for the two native Richmonders, Matt Gwaltney and Rachael Hill. It was obvious they were loved by many.

The items around each memorial stone are just a fraction of what has been left by numerous visitors, and for a time, many additional items were displayed under a tent on the drillfield. The tent items have now been moved to the Shultz Dining Hall, and that was the next stop on Judi's tour. I was not prepared for the volume of items there, or the emotional impact they would have. There were aisles and aisles of huge signed banners, and posters sent from everywhere. There was a table for each of the victims displaying more of their memorial items. People sent or left some really beautiful items, including an icon, a painting, a carved wooden horse with signatures all over it, and a set of handpainted Ukranian eggs. I had been holding back tears ever since we first arrived at Norris Hall, but finally had to let a few go when I came upon the table containing items and letters for Cho's family. On it were many notes conveying concern for the family and forgiveness for the shooter. And a simple handwritten note on a 3"x5" index card that said, "I forgive you..." sent me over the edge.

After leaving Shultz dining hall, the four of us ate dinner at Mike's Grill, and later had coffee at Bollo's before saying goodbye to Judi and retiring to our hotel rooms around 10:30 pm. What a long and full day!

(I invite you to see more pictures from Friday's campus tour which can be found in my "Virginia Tech" Flickr photoset, and I would recommend either the slideshow or the detail method of viewing.) 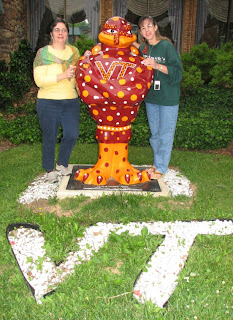 We Are All Hokies.
Issy & Anne with Hokie-Pokie-Dot bird at our hotel
*

The next morning after checking out of our hotel, we ate breakfast across the street at the Inn at Virginia Tech and then found our way to the conference room where the Hokie Healing Blanket sewing party was taking place. The three of us sat at a table where we made new friends with several local knitters from Blacksburg, Christiansburg and Roanoke. We were also joined by another Blacksburg friend Lawre, sister of our friend Jane in our knitting group. We had just seen Lawre when she was in Richmond on Tuesday, so it was fun to see her again so soon.

The ladies of Mosaic had prepared 32 bags of 64 squares each, and so our table grabbed a bag, arranged our squares and got down to the business of whip-stitching them together into an 8x8 blanket. Eight seamstresses and sixteen hands made light work, and we finished seaming our blanket in two hours.

By the time we finished Blanket #1, a couple of newspaper reporters and tv news crews had arrived and were shooting video and pictures and interviewing various folks. Issy managed to find herself in an on-camera interview for Roanoke's News Channel 10, but I'm not sure if that has aired yet. I did see that Channel 7's story and video has already been broadcast, and you can see Issy and myself very briefly in that. There's also a little article in the Richmond Times Dispatch and Anne and Issy are holding our blanket in that picture, along with Lawre, Gina Bonomo, and new friends Heather and Joy Kim. I'm quoted briefly, although I have no recollection of saying those words. I do recall starting to cry (and the subsequent embarassment) when he asked me about our previous day's campus tour and what was most meaningful to me.

The folks from Mosaic were incredibly generous, giving a goodie bag to the first 100 knitters who arrived. There were also door prizes and a silent auction. I won a craft book and Anne won a gorgeous red cashmere cabled scarf. They were also selling some really cool Hokie Knitting merchandise, include t-shirts and satchels. Food and drinks were provided, and one woman walked around massaging everyone's neck and back, and so we felt very taken care of during the whole experience. Our table managed to get another blanket sewn together before Anne, Issy and I had to head back home around 3. I had such fun sewing, though, and was really tempted to stay and work on a third blanket. 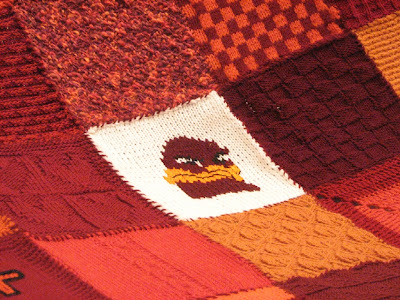 (More pictures from Saturday's blanket sewing party can be found in my "Hokie Healing Blankets" Flickr photoset, and again I recommend either the slideshow or the detail method of viewing.)

As of this writing I haven't read any other blogs about the event, so am not sure if all 32 blankets were completed yesterday, but if not, I have every confidence that they will be completed in short order. Mimi told us on Friday that at last count, they'd received 6,100 blanket squares, and after that, stopped counting. They asked that everyone take bags of squares home to sew more blankets together and then send them back to Mosaic. Issy used her experienced eye to pick out squares for a blanket with the idea that we Tuesday Night Knitters might sew one together. Additional blankets will be given to survivors, and perhaps to some of the police and EMS folks who attended the scene.

My friend Judi also requested that we might obtain a square for each of her Hokies United students who have been working so tirelessly to maintain the memorials. Gina very graciously agreed, and so I selected a number of squares and left them for Judi.

Issy & I were on the road headed home by 3:30, and decided to take 460-East the entire way, rather than the truck-clogged I-81/I-64 route that my GPS and MapQuest recommended. It took us slightly longer, but most of the drive, once past Roanoke, was quite peaceful and pleasant. And it was a pleasure to have Issy there to keep me company!

All in all a lovely, meaningful and fulfilling couple of days!
*
Posted by Mary at 7:38 AM

This was one of the best experiences in my life.
Except for being on TV!!That was nerve racking.
Thanks again for driving all that way.

Loved meeting you and your sister, hugs for coming all the way to Blacksburg and helping out with the project!

Sounds like a great weekend! Sadly, I had other plans and was unable to go help but was glad to hear of such a great turn out.

I loved reading about your day, thanks for taking such good pictures and telling such a good story! Jane

What an amazing experience! Thanks for sharing it with us.

hi mary, thanks for sharing this!
cheers,
susan

It's so neat that you were able to come all the way from Richmond to help out! Glad you got to visit our campus and see the memorials while you were in town. Take care!

Wow, I just saw you in the TImes Dispatch in the very front of the Metro& State section. WTG.

What a mix of grieving and hope. I'm sure the families will be comforted by all the caring that has gone into those squares and blankets.